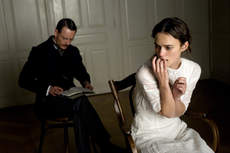 The newly released film “A Dangerous Method” tells the story of the complex relationship between Sigmund Freud and his much younger heir-apparent, Carl Jung, both early founders of the modern field of psychology. Freud and Jung came to represent differing schools of psychoanalytic thinking, a separation not only hastened by intellectual disagreements but by a rupture in their friendship over the married Jung’s sexual relationship with his patient, Sabina Spielrein. Through this Oedipal drama we witness the emergence of a way of understanding human nature that first shocked the world and now, a century later, dominates our thinking.

Like psychoanalysis itself, the movie explores ideas about sexuality, especially the tension between the anarchy of desire and the necessity for its confinements.

It begins when young Spielrein is committed to Jung’s Switzerland clinic for treatment for hysteria. His first psychoanalytic patient, they engage in an intellectual and emotional expedition of what was then uncharted territory, the subconscious. Through Jung’s questioning, Sabina slowly recalls episodes from her embattled childhood, reliving the feelings that traumatized her.

By conferring with fellow analyst Otto Gross, a libertine sent by Freud for treatment, Jung finds the rationale for entering into a sexual relationship with Spielrein, whom he has barely resisted. He convincingly argues that effective treatment requires more than Freud’s “talking cure.” A proponent of sexual emancipation, Gross considers all repression an artifact of another era, making the case that sex with patients is both a moral and therapeutic imperative. That’s all that Jung needs to begin a sexual relationship with Sabina as part of her treatment.

The filmmakers stay faithful to representing the shifting values and mores of this nascent period of early psychology and do not judge Jung’s affair by contemporary standards. Instead, they present the transgression of the doctor-patient boundaryâan established treatment protocol yet to be formedâas emotionally fraught, yet deeply therapeutic in restoring Speilreins mental health.

Jung’s approach is radical by any standard. He recreated the childhood beatings Spielrein endured from her abusive father. By helping her understand her pain in the consultation room and fully experiencing the childhood trauma that she has come to eroticize, in the bedroom, she is slowly restored to health.

The treatment is not a one-way street. Spielrein not only plays a major role in the intellectual development of Jung’s theories, she also helps him face his own repressed sexuality, though the film never gives the details.

Increasingly conflicted emotionally and professionally by the betrayal of his wife, Emma, Jung breaks off his relationship with Spielrein. He also breaks with Freud over his interest in spirituality and mysticism.

In the hundred years since, we’ve learned a great deal about the consequences of violating doctor-patient boundaries and developed a strict code of ethics for protecting the sanctity of the therapeutic relationship. Some of the ideas that were explored in the early experiments of psychoanalysis have been discarded, others have had a profound impact on contemporary therapies.

Expanding on accepted theories of sexuality in my book, “Your Brain on Sex,” I explain how during the heightened sexuality of adolescence, we eroticze unmet childhood needs and unresolved conflicts in a complicated attempt to heal ourselves. In other words, we turn early painful experiences into pleasurable ones in order to counteract their power over us. As we grow into adulthood, these same conflicts, which now have sexual themes, are encoded in our fantasies and desires, or in some cases, in our sexual behavior. Through our sexuality, we attempt to gain mastery over feelings of powerlessness, shame, guilt, fear and loneliness that might otherwise defeat us.

While I do not condone Jung’s relationship with Spielrein or sex between any therapist and patient, I do espouse acting out sexual desire within the context of what I call a “restorative” experience that can have powerful therapeutic potential.

In a restorative experience, we create a safe and consensual encounter in which we act out with our partner a fantasy whose symbolic meaning we have already come to understand.

Whether the scenario is as conventional as romantic seduction, or as unconventional as extreme bondage, we connect–physically, emotionally, and spiritually–with the deepest part of our psyches recovering what was suppressed or lost. In the process, we restore ourselves to wholeness.

Of course, the deepest and most lasting healing comes when we have the opportunity to experience our true desires and work through the mastery of the conflicts behind them over time. Whether it’s with a lover or spouse, a restorative relationship assumes an emotional posture that is often diametrically opposite from the dysfunctional ones we experienced in our childhood. Characterized by openness, intimacy, and mutual respect, the new relationship allows us to derive a new settlement to old conflicts. Within this friendship, sex is not separated from the joys and struggles of daily life, nor diminished by its challenges. Instead it offers a rich and fertile ground for a meaningful and satisfying life.

Nearly two years after his divorce, Jason came to see me for a consultation. A tall, handsome 45-year-old with deep blue eyes and a shock of gray hair, Jason was having problems with women. He had no trouble meeting them, but he found growth hgh hormone human review reviewnet that after dating for a few months, they would invariably end the relationship.

When I asked him why, he said, “Women think I’m too laid back. I get called things like passive or dull. They lose their patience or get bored. They yawn in my face.”

By the time he’d come to see me, Jason had given up dating and was spending his free time in his workshop repairing old watches, avoiding the world. But a good friend approached Jason, who confessed he was depressed over his relationships with women and he agreed to get therapy.

Shy and soft-spoken, Jason grew up as the scion of a privileged New England family known for its wealth, as well as its lack of accomplishments. Although Jason’s father was an architect, he had never been successful. Instead, he enjoyed time on the golf course at the same club to which his own father and grandfather had belonged.

Jason informed me early on that he was “proud to be a terrible disappointment to my parents.” When I asked him how he’d disappointed them, he replied, “Because I refused to follow the social agenda they set for me.” Instead, he had devoted himself to more intellectual pursuits repairing watches, even owning a small repair shop. When he wasn’t being “totally ignored by his father,” Jason said, he was being berated by him for his disloyalty to family tradition, a label Jason wore like a badge. Jason’s mother, whom he described as cold, put most of her energy into fundraising for local charities. “Everything for strangers, nothing for family,” Jason said.

Although Jason told me that he’d rejected his family’s social expectations, he nonetheless found himself dating woman from his same social class. “In general,” he said, “they turned out to be more like my parents than not. And mostly they choose me.”

While it seemed obvious that Jason’s depression was related to his long-standing conflict with his parents, I chose to approach it by first examining his failure with women, the symptom that had brought him to therapy.

When we began to talk about chemistry, Jason seemed puzzled by the concept. “It’s not something that’s ever happened on my end,” he said. When I asked why, he insisted he had no idea. When finally pushed to explore what might attract him, he imagined a woman with “a kind, open face, delicate features and a sweet disposition, nothing like the women I’ve gone out with.” This seemed to come as a surprise.

As the therapy unfolded and Jason grew more comfortable exploring his sexual fantasies, he came to understand that what actually aroused him was the image of being gently caressed. He craved tenderness–“soft kisses and gentle fondling.” In the past, when he engaged in sex with woman, his orgasms came prematurely or not at all, disappointing everyone. Now, when he brought himself to orgasm, he imagined “the gentle touch of fingers brushing against my back.” Jason soon recognized that he had unknowingly sexualized the qualities that he had so long ago craved from his parents–warmth and tenderness.

It was clear how his lack of authenticity had contributed to his failures. In his past sexual practice, he had never experienced such feelings because the women who had chosen him were cold, no match for what he now recognized as his true desires. Caught up in his rebellion against his parents, he had sabotaged his chance at happiness by engaging women who resembled them and whom he would then punish by withdrawing until they gave up.

Once Jason understood this, he decided he could break the cycle and search for an experience in which he could honor his true sexual desires. For the first time, he felt excited about dating. He posted a profile on a popular Internet dating site which included a brief and poetic description of his sexual interests and within a short time received a dozen well-suited responses.

Within a few months Jason had met a woman whom he described as lovely. And as shy as he was, Jason took my advice and began to talk about sex after a handful of dates. He opened the conversation by speaking about his own experiences, and then gently worked toward asking about hers. By then the conversation seemed natural. They quickly discovered that they felt the same way about sex–they were both turned on by the gentle touching and tenderness. It wasn’t long before they were having sex.

“This was the first time I actually made love,” Jason told me, “and it was tender and beautiful. I find myself wanting to be generous with her in every way and for hours. She asks nothing of me, expects nothing from me. She comes from a middle-class family, the sort my parents wouldn’t have talked to. But I’ve met them also, and they’re as kind as she is. I’ve finally realized that being in a family doesn’t have to mean being in a prison.”

Jason had broken the cycle. By following the steps of Intelligent Lust he discovered his true sexual nature then succeeded at choosing a partner with whom he was not only sexually compatible, but who enabled him to heal an old family conflict.

First published on PsychologyToday.com on November 27 2011.

Previous postForbidden Desire: The Cost of Living Without Sex Next postThe Soul of Therapy