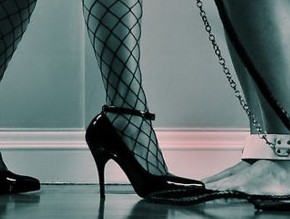 If you’ve followed the steps of Intelligent Lust this far, by now you’ve gained an understanding of your true sexual desires and their meaning and purpose in your life. You may have even met someone with whom you share the likelihood of sexual compatibility and through conversation and experience have established trust, respect, acceptance, and generosity – the elements of a solid relationship. But you won’t fully appreciate the restorative aspects of your fantasies and desires until you fully engage them.

By acting out our sexual fantasies under the right circumstances, we have the opportunity to experience our true desires and with time, work through the mastery of the conflicts behind them. Whether it’s with a lover or a spouse, we connect – physically, emotionally, and spiritually – with the deepest part of our psyches, recovering what was suppressed or lost. Whether the scenario is as conventional as romantic seduction or as robust as sex with toys, whips or ropes, we restore ourselves to wholeness bringing into alignment what we’ve uncovered about our secret desires with actual physical experience.
Sometimes this happen organically. One day we just might find ourselves falling into the arms of our lover or bent over their knee for a spanking. But setting up a specific scene with a partner may be more meaningful and satisfying. Some partners prefer to keep the structure loose, emphasizing a few actions or fragments of stories, while others, prefer a more highly structured script laying out the scenario detail for detail. Either way, we engage all our senses in full action – moving, talking, imagining, touching – an involvement that is ultimately both thrilling and spiritual.

While planning sex may seem artificial, as our inner feelings, attitudes, and behavior interact with a real person on unfamiliar ground, there’s plenty of room for spontaneity. Here are some other helpful guidelines for creating what should be a rich, unreserved, and imaginative scene.

When we act out our fantasies with a partner with whom we are truly sexually and otherwise compatible, we enter into an altered state, a realm in which play is supremely important, yet nothing could be more real and serious. It is a paradox in which we ecstatically lose ourselves to passion, yet remain sublimely tethered to our deepest psychological truth, welcoming the ghosts of the past. All the different levels of our sexuality run together and sex becomes profoundly meaningful. It is a true elixir – a cathartic experience, which reconciles old conflicts and satisfies unmet needs.

Some of us may feel a particular fantasy shouldn’t be shared, that it would feel creepy or somehow destructive to act out it with a partner. But if we’ve successfully followed the steps of Intelligent Lust, not only have we worked through the fear, shame and guilt that hold our desires hostage, we’ve also established a level of intimacy, honesty and trust with a partner that would prevent him or her from feeling threatened. Any anxiety or self-consciousness we may experience in anticipation of acting out fantasies will usually yield to the excitement of expressing our true nature.

My patient Jane had a younger sister who was physically handicapped by muscular dystrophy at a very young age. Jane’s parents felt terribly guilty over her sister’s condition and vigilantly attended to their “handicapped” child, accommodating her every need, far beyond what was necessary.

Not only did Jane herself feel guilty for being the healthy child, she also suffered silently from her parents’ inattentiveness and wondered what it would be like to be the center of anyone’s attention. Furthermore, in high school Jane was taller than most of Virility Pills the boys and less physically developed than the girls, so she ended up with the horrible nickname of Olive Oil. As she grew, Jane developed sexual fantasies in which she was a beautiful enchantress who could charm and seduce even the most handsome and unavailable men around.

Jane came to me for therapy at thirty because she felt lonely and isolated. She suffered a string of failed relationships with men she described as “emotionally unavailable.”

“They put their work or families ahead of me,” she told me.

Jane soon recognized she had repeatedly reenacted her childhood conflict by choosing men who gave her so little attention. And while she was highly sexual in these relationships, she also abandoned her true sexual desires in favor of pleasing her partners whose approval she desperately sought.

Over time, she allowed herself to enjoy her fantasies and eventually began dating from a new perspective. Now she looked for men who were a better match, using Intelligent Lust as her guide.  She learned to replace her “plain Jane” self-image with one more flirtatious and seductive.

Within months, Jane met a man named Bill. Bill had also been tall and awkward as an adolescent and he also had sibling issues; as a boy he had been compared to his handsome and brilliant older brother. Despite his physical awkwardness, Bill had natural talent as an athlete and in high school was a varsity basketball player. Still, even as his star was rising, Bill felt uncomfortable around girls and developed a reputation as a geek. In his fantasies, however, Bill imagined being wildly pursued by women. His favorite masturbation fantasy was having a harem of women chasing after him.

With my coaching, Jane got Bill to talk about his fantasies, and soon they agreed to act them out, setting up regular dates in bars. Together they developed a script for their encounters. Pretending they didn’t know each other, Jane would flirt with the tall guy, flatter and charm him with compliments, and eventually invite him home. At first Bill would resist, but inevitably he would surrender to the intense seduction. At home, he would make love to her for hours while she teased and taunted him until they both climaxed, satisfying each other’s sexual fantasies.

The experience continued regularly over several months and as they grew more trusting of one another, their emotional and sexual exploration deepened, as well as its intensity and satisfaction.

Acting out her fantasies changed Jane. She felt empowered. Not only did she feel her deepest needs had been validated and affirmed by Bill, but for the first time she felt “real.”

Although Jane ended the relationship with Bill several months later when she found an exciting job out-of-state, it was a profoundly helpful experience that served to correct a lifetime of neglect. Their high level of intimacy became a standard of measure for all future relationships.

As we explore the nuances and subtleties of our sexuality by continuing to act out our desires, we stop measuring our actions against traditions that have been handed down to us. We develop our own moral code while constantly learning to express aspects of who we are with greater authenticity. The degree of intimacy, respect, and trust achieved with a partner through this process is unimaginable when compared to our past sexual experience.

Embracing our fantasies is not a static experience; our new desires slowly unfold over the course of our lifetimes, particularly when we have fully expressed the old ones. Yet some will remain faithful to the original even though we no longer require them. Intelligent Lust fully engages our senses, minds, and souls.  There is always more for us to understand, enjoy and share. And like the most authentic artists, our style and inventiveness grow more nuanced with time.

By completing the steps of Intelligent Lust we have experienced the deeper nature of sex. Sex is no longer something one person does to another, nor is it a guessing game or mystery. We have acknowledged the truth about our fantasies and desires, unearthed hidden conflicts and unmet needs by making important connections to our past. We have created new relationship experiences and continue to repair old conflicted ones or calm the persistent claim of early unmet needs. We have dared to make sex a vital part of our lives, a rich fertile ground in which we cultivate self-knowledge and self-acceptance.

First published on PsychologyToday.com on October 12, 2011.

Tags: 6, great sex, intelligent lust, smart sex, step six
Previous postMarrying For Sex Next postWhat We Can Do When Sex Leaves a Relationship