The Advantage of Sex 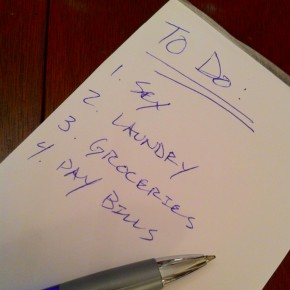 Sex is an affirmation of life. By making sex a prominent part of itâplacing it on the top of our list of prioritiesâit helps us face daily challenges in other parts of our lives. No matter what struggles there are, we put them aside and establish a time and place to embrace desire and pleasure. We are less likely to fight over folding the laundry or the details of renovating the house when we feel sexually satisfied. By following the steps of Intelligent Lust, described in my, Your Brain on Sex: How Smarter Sex Can Change Your Life, we cultivate a physical and emotional language which that allows our deepest emotions to be expressed and understood, constantly injecting new vitality into our relationship and increasing the quality of our lives together. Smart sex is better than great sex because it leads to building a relationship in which our sexual desires can be used to heal childhood conflicts and satisfy unmet needs that we have carried into adulthood. Communication, respect, trust, and generosity that begin in the bedroom find their way into every aspect of the relationship. Intelligent Lust gives us an advantage in dealing with life.

Relationships that grow out of this process are stronger than those which are based on other factors such as social standing, security, or similarities in backgrounds and religion. Many of those so-called well-matched relationships fail because sex and sexual compatibility has have not been a priority, and the relationship lacks that connection and all the ingredients that go into making it.

Whether itâs because of self-denial, poor communication, or misunderstanding of our true desires, problems arise in the relationships when thoughts and feelings go unspoken and resentments and frustrations build. When a relationship lacks the restorative elements of self-acceptance, transparency, and authenticity breast beauty cream triactol gained by following the steps of Intelligent Lust, there is often self-serving, abusive, or manipulative behavior taking place instead.

Typically when this occurs, men are more likely to express their frustrations by acting them out by drinking or engaging in secret affairs than they are by inviting discussion. Weâve all heard the refrainâ “men think with their dicks, not with their brains.” For women, conversation usually comes first. But after a few attempts fail, their behavior usually grows more covert, using criticism to undermine a partnerâs self-esteem or playing the victim or martyr in an attempt to gain sympathy or, in some cases, living in a state of silent of contempt.

On the other hand, in relationships in which smart sex is the centerpiece, behaviors like overreacting, acting out or passive-aggression are less likely to occur. And a secret affair doesnât typically happen when people are continuously communicating about their needs, sexual and otherwise.

The fact is that we are all driven by the same insecurities and frustrations. Itâs not that âmen are pigs,â or âwoman are selfish bitches,â itâs that those relationships which that favor secrecy over transparency, pretending pretense over authenticity, detachment over intimacy, ritual over exploration, are much more vulnerable to trouble. Relationships are systems in which problems grow out of the interactions of everyone involved. âBadâ behavior doesnât happen as an isolated act. Scratch the surface of the relationship and you will discover a cycle of actions, reactions, and counteractions that lead to it.

Of course, new challenges occur over time for every couple. Their resolutions require a process of direct communication, understanding, and problem solving. Couples who have investigated their sexual and emotional connection by following the principles of Intelligent Lust, have already proven their ability to handle difficult and sensitive issues.

Previous postWhat Attracts You? Next postWhat Do Our Fantasies Say About the Past?